You are at:Home»Older posts»WSOP Day 1C: James fights his corner on a tough table PartyPoker qualifier James McManus is sitting at table 1 in the blue section of the Amazon Room. It’s tucked away right in the corner, the furthest you can get from the throngs of gawping spectators, and probably the quietest spot from which you can mount a challenge on the WSOP leaderboard. It is also where 2006 champion Jamie Gold sat yesterday before busting out. 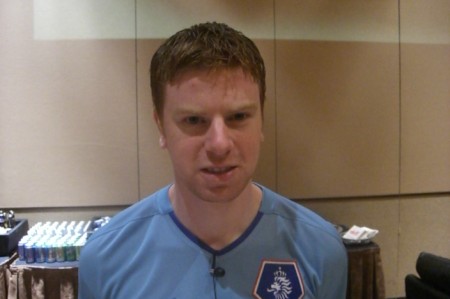 James was happy enough with his seat, hoping before the start that it would, indeed, be calm and quiet. But the table draw conspired that this would be one of the tougher tables of the day. Drawn with James was US pro Kirk Morrison, who has more than $2.6 million in tournament cashes to his name. Then EPT Poland champion Peter Jepsen, from Denmark, sat in seat one to add to the fireworks.

While Jepsen and Morrison have been going at each other, James, from Dublin in Ireland, has avoiding the firefights and quietly building his stack to nearly 50,000.

James, 23, made a name for himself last year after an incredible run of luck on PartyPoker. He scooped $52,000 on the Bad Beat Jackpot, won a Wii console in the Grind promotion, then won a freeroll with a Mini car as first prize.

He hopes that luck has travelled with him to Vegas. “This is my first time here and I’m looking forward to the event. I’ve had a good sleep and I feel in good shape.”

We also had Dutchman Sander Van de Ruit, pictured below, playing today, and at dinner he had eased up to 30,000. His table was broken deep into the afternoon – “It’s a shame,” he said, “it was a good one to be on”. Nothing to do with the fact that he was in his patriotic Orange section of the room, of course.