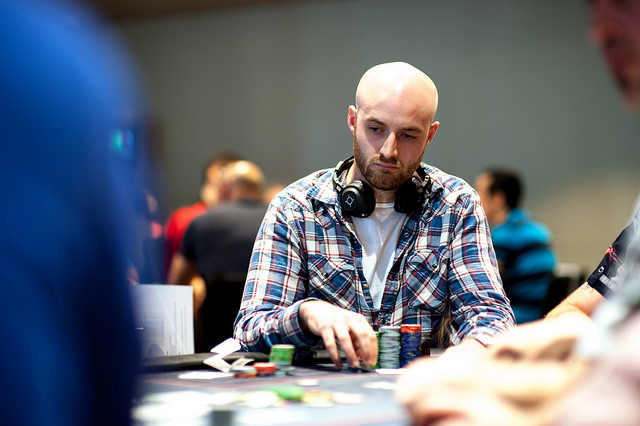 The scores are in, the numbers have been crunched in record time and here they are – the surviving 67 stacks from Flight 2.  These will be added to the 90 surviving mountains from Flight 1, so 157 through to Day 2  except of course that plenty of those stacks are for the same person, such as Philip Gould (pictured) who has the most accumulated chips right now, with a whopping 200,200.  There’s a wonderful symmetry to that, and we hear on the grapevine that Gould will skip tonight’s third and final flight.  A chance for someone to overtake him! 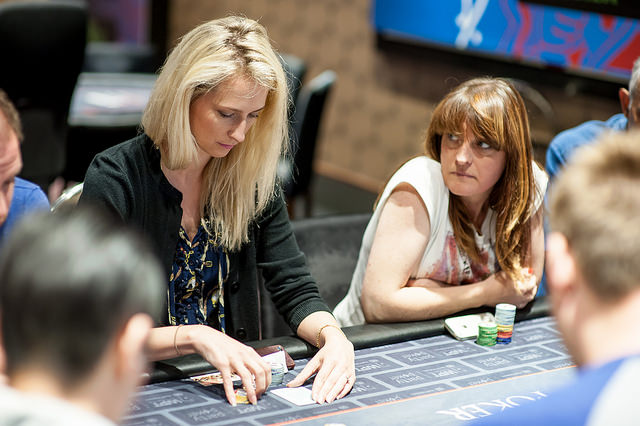 Plenty of female players are still involved as Flight 2 comes to a close here at Aspers in London for the WPT National Main Event. Daiva Baruskaite (left) and Dennise Frost (right) are juts two of the excellent girls still in the hunt for the title and lion’s share of the minimum £100,000 prize-pool.

Who’s YOUR pick to win? With over a hundred players still battling, we have just twenty minutes left to play at 500/1000.  Here are a few players we managed to hustle for their numbers as the plastic bags were being distributed… 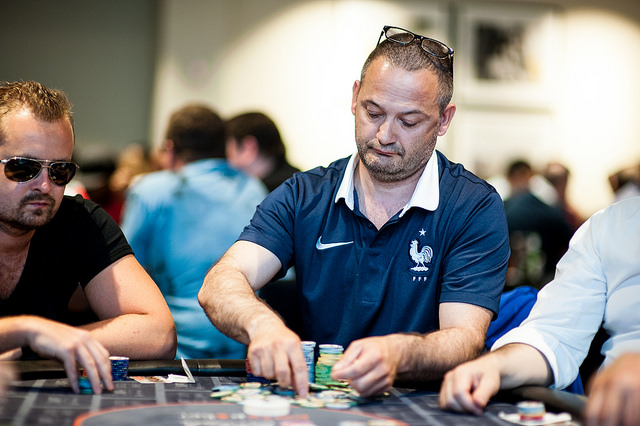 One player is down, but the other is out.  James Mitchell suffered that tough beat a short while ago, but he is finally out of Flight 2. Pre-flop, he was one of three players paying 850 to take part.  The flop came

, getting in all-in after it went bet, raise, re-raise.  No diamond came and he finds himself on an orange sofa in the partypoker lounge watching France 0-1 Germany.

One player with an obvious interest in that game is Herve Decker (above).  He may be down about the result as it stands in Brazil, but he’s managed to make a decent pot from Ross Mannion as top pair beat 2nd pair.  Decker may be a tiny bit short, but he looks to have every bit of determination that he’ll hope his compatriots have in the World Cup. 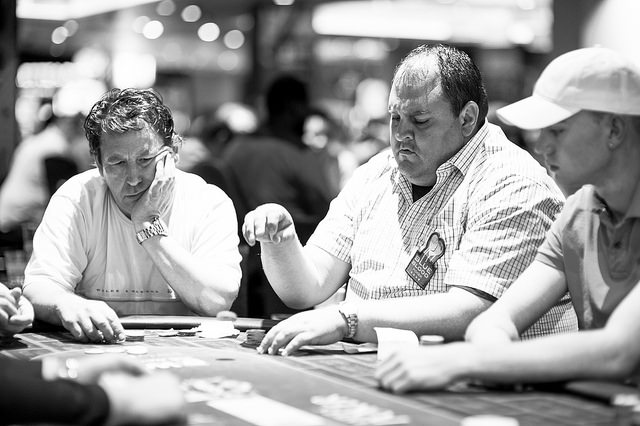 With 157 the confirmed number of entries for today’s Flight 2, we now have 363 entrants overall.  Tristan Chaplin, above, has a great record here in the Aspers Cardroom, with his World Champion status as the APAT Main event winner a couple of months back still fresh in the memory.

Herraghty Looks To The Heavens 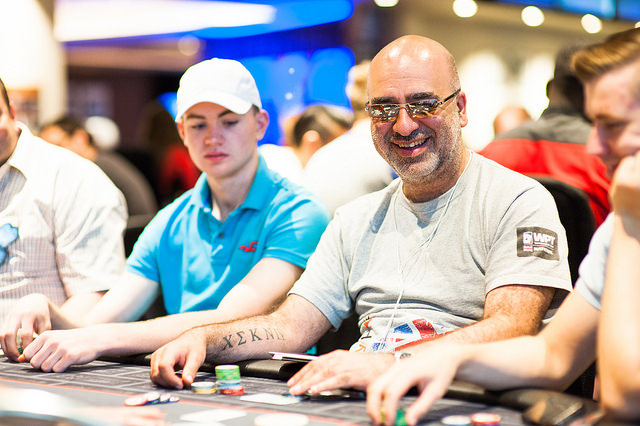 James Herraghty (left) must have been born under several lucky stars, as he’s survived when all-in and at risk in another pot that has got away from Tim Tim Timotheu (right) , who has definitely been on the wrong side of luck recently.

All the chips went in on a flop of

, with Herraghty openly aghast, turning over

. No problem, however, for Herraghty, as the

dropped on the turn, neatly filling in his miracle gut-shot 3-outer for a split pot when the

on the river completed the board.

Tim Tim took it well, as you can see! Darren Mapley may not have played Flight 1a yesterday, but the Champion was never going to let his title go without a fight, was he? Darren travelled down to London for today’s flights and is in decent shape, hovering around the 25,000 mark at time of going to press.  He has already spent a chunk of his winnings from taking down WPT National in Newcastle…on a canoe!

“He spent a load on that canoe!” says his friend Andy Sharples, who’s busted this flight but will be hanging around from the evening leg.

Darren explains to us that he did indeed buy  a canoe, and has already been on holiday with it, so he didn’t make it Vegas.  Tudweilliog in Wales was the destination instead, where he’s told us tales of lifts back from the pub by the bar-staff, it was so friendly.  This was all after Darren was spooked by the cows invading his field, a field his buddy Andy insists was inhabited purely by Darren and ‘several girls’.  Darren is in the zone at the table, at least…! 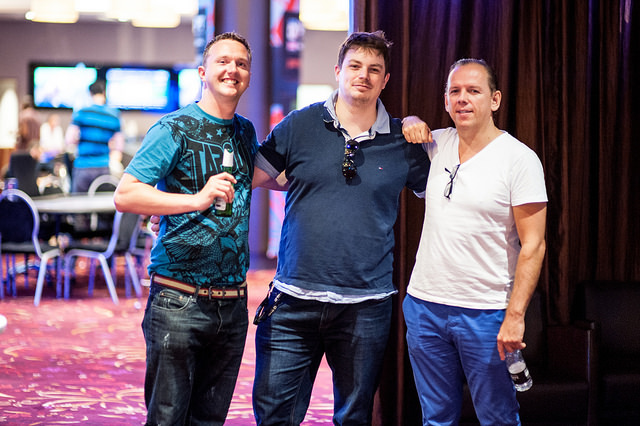 James Mitchell (above, left) has already made it through Flight 1a with a stack, but although he’s doing his best to add to it, he’s just suffered a tough beat to lose most of his stack today.  Raising Tom Carpenter’s raise from 700 to 1900 pre-flop, the two men were alone in seeing a flop of

Green About the Gills 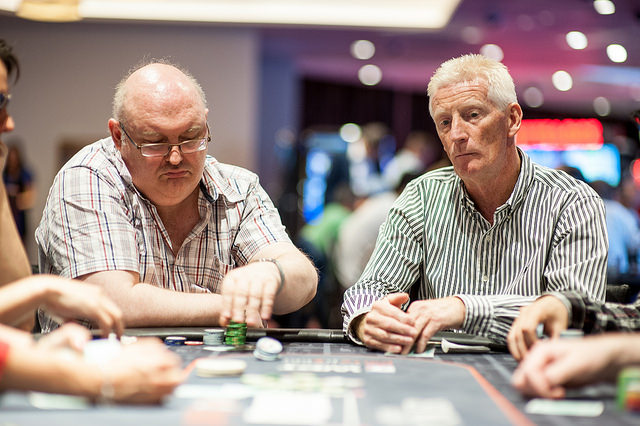 Philip Green (above, left) may have qualified for all three of his bullets online via partypoker for around $10, but so far, his WPT National UK Event has not gone to plan.  He busted in an 80,000 pot late last night on Flight 1a, as his pocket kings were shot down by all three of the hands who were all-in pre-flop with him.  Today, he’s up to 27,000 but trying to shoot for so much more.  He wants to break the 100,000 mark by the end of the day…it’s tough to do! 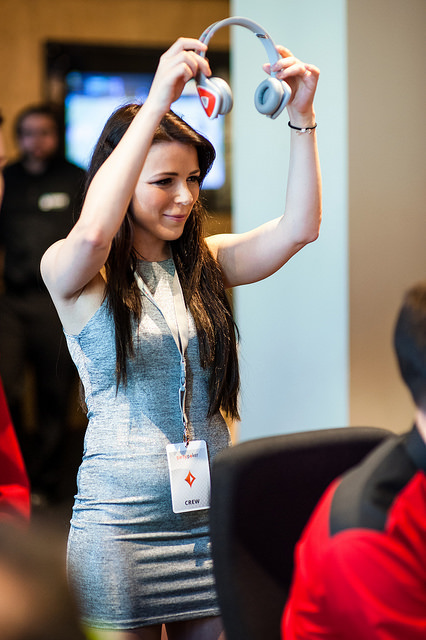 Want to own a pair of Monster Headphones if you’re playing in this Flight 1b at the WPT National UK Main Event?

All you need to do is tweet us a picture and amount of your chip-stack at any point today, remembering to use the hashtag #WPTNUK and @partypoker at the end of your message! 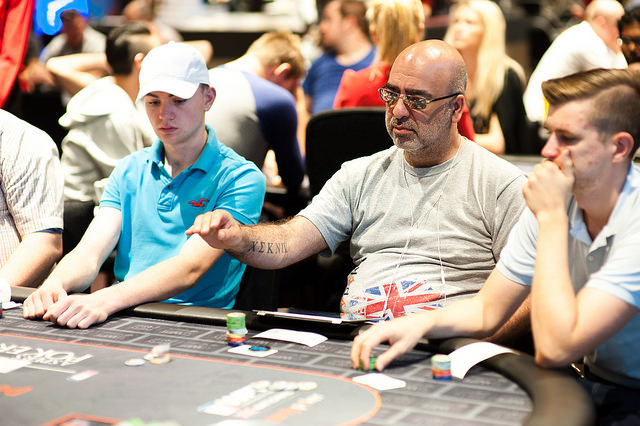 Even though we’re only half-way through Flight 1b (and therefore Day 1) , some players will be waiting in the wings for Flight 1c to begin with a free glass of champagne rather than a stack of chips in their hands.  Rahim Tadj-Saadat has busted and will have one flight to try and make Day 2, starting at 8pm. Dennise Frost is faring better than yesterday, above starting stack on around 22k.  Tim Tim Timotheu (above, right) is doing even better, sat on 29k, but as he explained, it could have been so much more.  He held

and got out of the way pre-flop with two players all-in.  It was the right decision, with one having

, but Tim Tim would have made the nut flush by the river on a two-spade flop, so is gutted that several mis-clicks by opponents pre-flop led to him getting out of the way.

Philip Gould has taken early control of this WPT National Event in London’s stunning Aspers Casino.  After making it through 1a with an impressive, well-above-average 68,800, he’s in a terrific position to add to it today in a big way!

Phil led out, was raised by his opponent, re-raised and called the shove from his enemy, who turned over

took care of another player’s

“I might just go home!” said an astonished Phil, but he jokes. The headphones are on, and he’s in punishment mode! 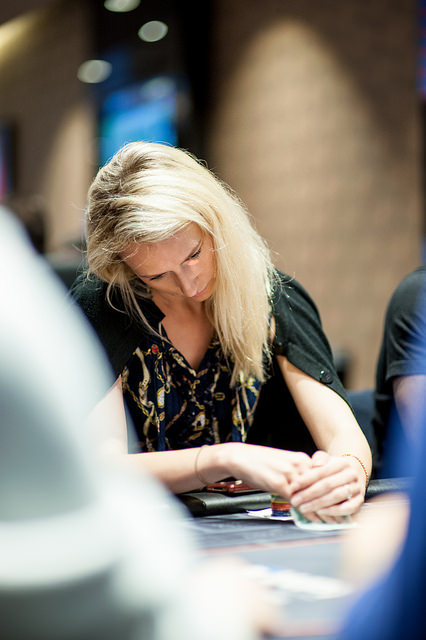 With so much going on, one could easily get lost in any of the tables as a feature table.  But there is action everywhere.  that said, the stellar names on Table 12 (which was fun yesterday, so maybe there is a mystical quality to this felt!) keep calling us back to learn from great players.  Daiva Baruskaite has won £1,000 entry tournaments, and she’s back at the baize with one of Britain’s quietest yet most successful tournament players ever in Surinder Sunar.  Daiva (pictured, above)  is off to the better start, but both of them have over their starting stack, and with their experience, it’s no surprise that they’re punishing the rest of the table.

and held to multiply his 13,200 stack up to an above average mountain.

Dr. Ash is short-stacked on around 8,200, but just as I type that he’s managed to squeeze two players off a raised pot pre-flop after the three community cards of

“What’s that worth now, though?” I asked.  Hi table-mate was quick with an answer. 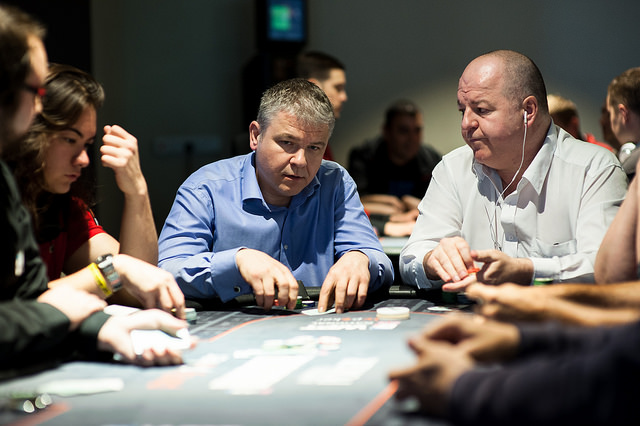 Life is full of peaks and troughs, isn’t it, and rarely is that more vividly illustrated than at the poker table.  All human life is here, and all fortune too.  Some have been getting the best of it, and others can’t find any luck other than the bad kind.

Paul Whyman (pictured, above right) busted Flight 1a and sadly, he’s out of 1b before getting much of a chance to make his mark.  The big hand was when he held

in the big blind and was up against one opponent with

was always going to get the money all-in and that’s exactly what happened, the

arriving on the turn and no riverboat coming to save Paul.  That left him with just 2350 (eleven big blinds), which he got in with

very soon after.  He was in terrible shape against

and, despite a sweat, couldn’t improve on the

Viktor Ilyukhin is faring very much better, and after escaping Flight 1a with over 50,000 after being one of the early pace-setters, is up to his old tricks, with a big river bluff and then elimination of a short-stack giving him over 40,000 as we enter Level 3.  Very impressive, and Viktor confirmed to us that he will be playing all three flights.  Commitment. 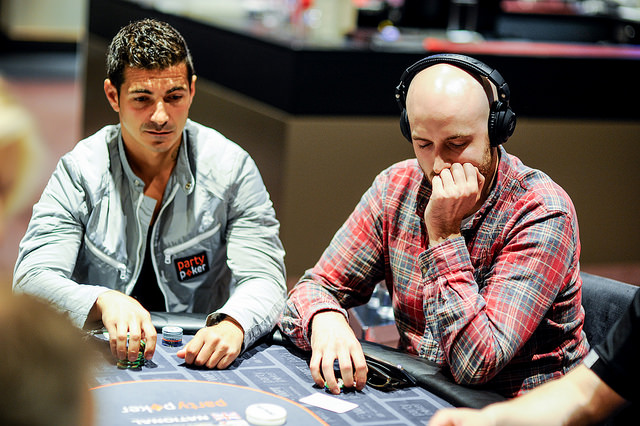 Philip Gould played Flight 1a yesterday and it went extremely well for the young man, with him bagging up an impressive stack of 68,800.  As he told us, it could have very different.

“I had 35k going into the last fifteen minutes, and to be honest I was happy with that.  I saw that as a decent stack to take through and build on.  then I got a set of jacks, and was doubled up in full. That was great, and now, if I do well in 1b, I’ll skip 1c tonight.  Anything over 100k is a really good stack to come back – over a hundred bigs and there’s a great structure tomorrow.”

We agree.  Only two players (Peter Mok and Natalie Sadri) have six figures in the bank for tomorrow’s Day 2 at present.

Philip has got off to a very good start today, raising pre-flop to 450 and getting two callers.  The three players saw a flop of

, and Phil c-bet to 975 in late position.  Only Haoran Cal came along for the turn of

looked to be a brick for both players, and after Cal checked, Phil led out 4100 – a big bet that could be read as an overbet or a value-bet.  Whatever it was, it scared off Cal, and Gould is chipping up early.  Could he end up our Day 1 overall chipleader?  He has a great shot if he continues to apply such pressure to his opponents… We’ve already got 116 players in their seats for kick-off with a veritable smorgasbord of talent at our fingertips.

Gareth Smirthwaite (our headphones winner below) is also in action, and determined to put his new ear-ear to use, rocking the headphones and chiling to some tunes as he plays…that’s a perfect Friday afternoon! Don’t forget, you can win a pair of exclusive Monster Headphones simply by interacting with us while you play the WPT National £200 event here in Aspers London.  All you need to do is tweet us a picture and amount of your chip-stack at any point today, remembering to use the hashtag #WPTNUK and @partypoker at the end of your message.

Welcome back to Aspers cardroom in London for the second flight of this £100,000 guaranteed partypoker WPT National UK Event.  With over two hundred runners yesterday, we expect over 400 over today’s flights will create a prize-pool of over £120k!

Yesterday, Peter Mok and Natalie Sadri were well clear of the others, racking up over 120,000 chips from their stacking stacks of 20,000.

Who will be the chip-leader today?  Let’s find out…