You are at:Home»Features»Interviews»Paul Romain Turns Free Ticket into $1,100 World Cup of Cards Seat

Those of you who follow our social media channels know we give away a lot of tickets. Paul Romain received one such ticket on Facebook, one worth $4.40. Paul used that $4.40 ticket for a World Cup of Cards Main Event satellite and ultimately walked away with a $1,100 seat in the $1 million guaranteed Main Event!

Paul is well-known on the British poker scene. A regular live poker player by trade, Paul, like so many others, was forced into the online poker world due to the COVID-19 pandemic and the restrictions in place because of it.

“I was a relative latecomer to poker. Had never played it until I was 46! Took it up as a hobby online in 2007 after taking voluntary redundancy from BT (yep you can do the maths – I can play the WSOP Super Seniors next year!!) and have pretty much supported myself through poker ever since. I’m a south London bloke, born and bred. “Oop North” starts at the Thames! I do have to go there regularly though, or at least I did, as The Vic is my “office”. £1/£2 live cash games are my bread and butter during the week and I’m a tournament player at weekends. Until Covid, I rarely played online in recent years other than satellites for live events and Sunday online tournaments if I didn’t have a live “final day”. This last year my income is well down!”

The Big Score That Started It All 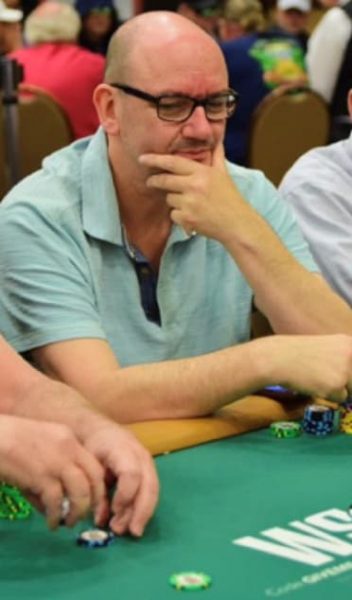 Paul in his element!

A large score at the start of Paul’s poker career convinced him that poker was the job for him.

“It started when I got a promotional computer disk through the mail one day. It had Paradise Poker loaded on it and a free $10 I think. Loaded it up, googled the rules, and away I went! Shortly after that, I started buying the poker mags, which are sadly missed, and then Harrington on Hold ‘Em Volume 1! I soon found other poker sites and played most of the time on Full Tilt back then. I hadn’t really been playing that long when I satellited into their $200 Sunday Major and around 06:00 the following morning was staring at the screen incredulously as it informed me I was $31,000 richer than I had been at 23:00. It was at that point that I decided the original plan of getting another proper job could wait!”

Anyone who knows Paul knows his passion for poker is only matched by his love of horse racing. Gambling seems to be in Paul’s blood, although he does not like the term gambling much.

“Blame my Grandad! As a young kid, I used to wait outside William Hill while he put his Saturday bets on the horses then watch the racing on TV with him. Boxing Day we used to go to Catford dogs at lunchtime and he’d put small bets on for me with my Christmas money! I don’t like what I do being described as gambling really. I see betting on horses, or any other form of sports betting as a game of skill with an element of chance. I enjoy the “game” of using all the information I can find to work out the right answer. Poker is similar I guess, perhaps with a slightly lower element of chance. I’ve never been one for casino games like blackjack, roulette, or spending hours plowing coins into slot machines. That IS a gamble and one I know I can’t figure out a winning answer to.”

Lady Luck Shines Down on Paul

Paul’s route to the $1,100 World Cup of Cards Main Event started with a free ticket on Facebook. His eye for a bargain started the whole process.

“Pure chance to start off with! I’ve played WSOP bracelet events, £5k EPTs, but I’ll never turn down a chance at free money. A Facebook competition to win a $4.40 satellite ticket for liking a post? I’m on it! Always got an eye out for a bargain. That’s my Nan’s more responsible influence balancing out Grandad’s contribution to my upbringing!”

The $4.40 satellite was a Phase 1 tournament, which fed into the $22 buy-in Phase 2, and finally, into the weekly final where 20x $1,100 seats are guaranteed to be won. Navigating your way through a single tournament is difficult enough, never mind three of them, Was it plain sailing for Paul?

“The first two-seat satellite went pretty smoothly. I amassed a dominant stack quickly, nothing fancy on my part, just big hands holding. We got to three left and the other eventual qualifier helpfully took out the bubble double-quick. I can’t say I remember much about the Phase 2 other than it took a bit longer and I had to work a bit harder! I eventually went through slightly short stacked for the 20 seat final, starting around 80th of the 107 entered.

Now even though I say so myself I’ve always been pretty good at satellite strategy. This isn’t the first high value, multi-leg spin up I’ve had. (€8 into a €2K Barcelona package and $22 into a $8K Caribbean package were my two others) So I was confident I could overcome the short stack start with a decent amount of run good (although I’ve been running like a three-legged donkey recently) and sure enough I managed to slowly but surely grind my up towards the 20 tickets.

By around 35 left I was short and never inside that top 20. I had to really trust my short stack strategy and luckily it got me to the last 23 where things not only really slowed up, with me still rarely nudging even briefly into the top 20, but I also went totally card dead. Not ideal! In the end, a key hand arrived with me 21st of 21 and a country mile behind. I was under the gun with the blinds about to effectively finish me off – with a PICTURE CARD!! I recalled those from a while back! Unfortunately, the King had a five with it but it had to do. I got three calls, flopped a King, and dodged more outs than you could count. Shortly afterward a confrontation on another table got me a $1,100 ticket. So a fortunate ending but a lot of hard work went into getting far enough to get that break. I’ll always take a deserved lucky break!” 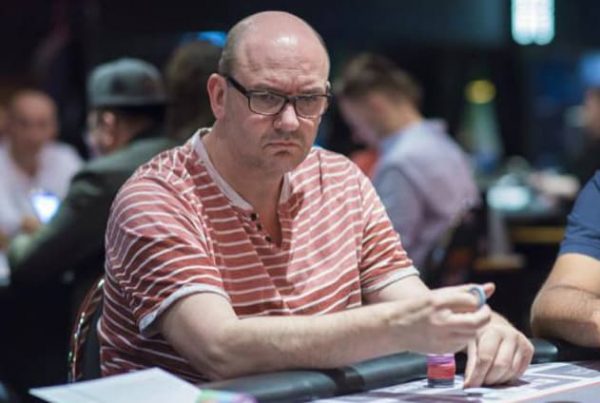 Paul getting his grind on

This was not Paul’s first rodeo when it comes to winning his way into much larger poker tournaments. It would be unfair to our readers not to ask Paul for some satellite-related tips.

“Buy Dara O’Kearney’s book! He’s a lot cleverer than me and better at explaining things. But a couple of things do spring to mind. The first is that a lot of people in satellites clearly haven’t got a clue how to play them. Getting even a basic understanding of the adjustments needed from a normal tournament gives you a huge edge. It’s really worth doing some homework on satellite strategy rather than just jumping in and playing your normal game. I can’t tell you how to win satellites in a paragraph but probably the most useful thing to remember is that you’re not trying to win. You’re not trying to amass as many chips as you can. Your only objective is to get through. That will often mean playing much MUCH tighter than you are probably used to, especially as you get near the bubble. Most people would be utterly amazed at how tight your calling range needs to be at this point of a satellite. Time and time again I see people calling short stacks with hands that should be an insta-fold because they are so used to snap calling with them in a normal tournament.

But just as a counterbalance to that tip there was an instance of ultra-tight play on the bubble last night that was so bad I was completely baffled. The two chip leaders, nearly 2 million chips each were next to each other, two to their left was the short stack with barely enough to pay the upcoming blinds, say around 30k from memory. Shorty folded under the gun and when it came round to the two monster stacks they decided to go to war with each other. It ended with around a million chip-pot changing hands. Completely unfathomable as to why they bothered, even with AK and AQ, and one of them could easily have busted despite the short stack effectively-being all in blind the following hand. Nevertheless, the following hand, the big blind hits the short stack who is now all in. It folds round to the first million chip stack. HE FOLDS!!! My mouth drops open. The second million-pound stack will obviously call to allow the small blind to join in and help burst the bubble. But HE FOLDS TOO!! So they were quite happy to risk busting each other with Ace high but don’t want to risk 1 big blind against the blind bubble! It was left to the small blind (if he had folded I may well have turned murderous) to call and win.”

Improvements to the Daily Legends Are Welcomed

Although Paul prefers live poker over its online counterpart, he is happy with the changes partypoker has made to its tournament structures. Limiting re-entries and reducing late registration are just two ways we have leveled the playing field, is Paul a fan of the improvements?

“I absolutely hate unlimited re-entries. One of the worst “innovations” in live poker since I took up the game that rewards professionals and recreational players with deep pockets at the expense of everyone else. Ludicrously long late registration periods are not far behind on my blacklist. So yes, you would be right in thinking it suits me!!”

Despite his success online, Paul is itching to jump back into the live poker waters at the earliest convenience.

“I can’t wait to get back to playing live. Online is HARD these days!! Too many clever kids and my brain doesn’t work quick enough anymore for the time you get to act online!

I’m not prepared to play long sessions wearing a mask though. A lot of poker rooms are hot and stuffy enough as it is. As soon as masks are no longer required I’ll be first in the casino queue”

World Cup of Cards Kicks Off on June 16

The World Cup of Cards festival usually takes place at the Playground Poker Club in Montreal, but this year’s edition runs online at partypoker.