Finally after waiting for so long the partypoker Premier League 7 officially kicked off on November 20th at the Playground Poker Club in Montreal, Canada and after a few last  minute changes to the line up we can proudly say that we’ve managed to secure some of the best and most respected names from the world of poker today.

Entrance to this game is $125,000 to enter, which is perhaps one reason why the Premier League has become one of the most respected poker events the world over, and of course one that every poker player wants to win. Although there’s no live stream this time around you’ll be able to catch up on all the news right here on the partypoker blog as the week  goes on.

Of all the changes we’ve been asked mostly about the missing Greg Merson. He mentioned to a source of ours “Something important came up and I had to cancel last minute. Hoping I get to play the next one. Premier League is an elite event.”

During the opening party at the W Hotel that’s found just downtown in Montreal Kara Scott and Jesse May held a draw to determine just who would be facing who in the upcoming  heats in the Premier League VII. Each participant was assigned one of 12 cards represented by a spot throughout the various heats of the tournament.

Heat 1 would comprise of the following players:

We are live from Playground Poker for Heat 1 of the partypoker.net Premier League VII, the first time the league is played on Canadian soil. The action is well underway for this pre-recorded for television feature table.

With about 28 hands played, here is how the chips are stacked.

The blinds are midway at the 2k/4k level.

Three players with pocket pairs with 5 players taking the flop with 50k in the pot. With Mizzi betting, 3 of the players folded and now it’s between Mizzi and Seiver. The flop is

on the turn. The pot total is 94k and Mizzi has checked. Seiver bets 65k and Mizzi to call. Clearly this is the largest pot of the night thus far with 159k. Mizzi folds and Seiver takes the monster pot.

Gross wins a couple of back to back pots in hands 37 & 38 against Mizzi and Seiver to extend his chip lead.

After 41 hands of play. Players are on their first break. Gross continues to lead Heat 1 with Mizzi on the short stack of the eight players. The blinds will be increased to 3k/6k.

About 211k in the pot as Antonio bets 67k on the river after Seiver has checked.

Seiver has a long pause and calls. Antonio takes the 474k pot with Seiver dropping in chips.

Colman raises to 18k from the SB, and Koon needs 12k to call from the BB. Koon raises to 43k and Colman calls.

Koon bets and Colman folds giving him the pot. 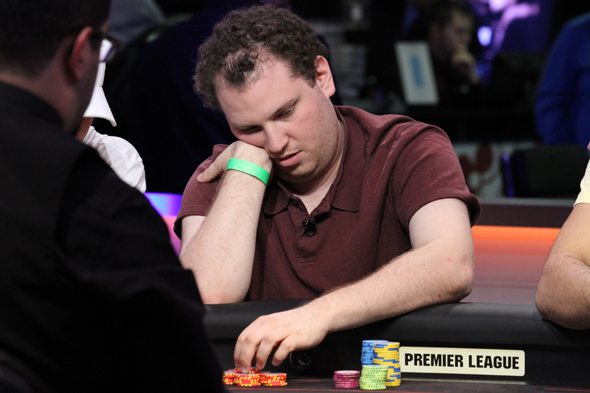 Seiver all in call pre-flop for 136k. Gross calls.

We have our first elimination of the night. Seiver gets no points for the remaining 3 heats. Gross, who has seen many pocket pairs this evening, is closer to the chip leader Antonio Esfandiari.

Koon bets 75k and Esfandiari folds followed by Jungleman. Koon steals the pot before players can reveal their pairs.

After 68 hands, Esfandiari, still in the lead has lost some chips. Rast is running on fumes.

Rast has played the patience game. He went all in with

. He stole the antes and blinds and is back up to 88k in chips. 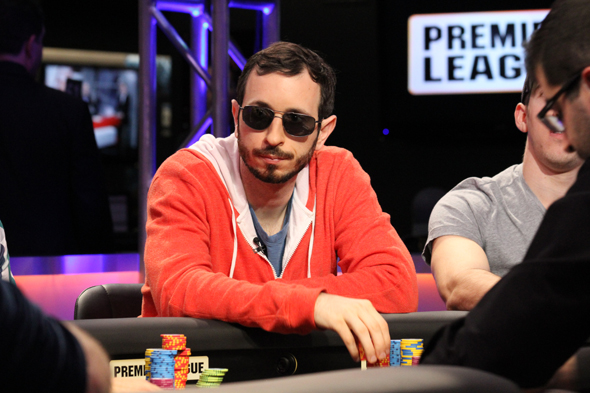 Rast all in with pocket 10’s. Esfandiari calls with J-Q off suit. The pot total is 174k.

Brian Rast is eliminated as Antonio picked up a full house. Rast picks up 1 point in heat 1 of the premier league.

Mizzi all in with

for 115k. Antonio calls with

Mizzi doubles up with pair of 4’s.

After a pause, Koon goes all in with pocket 4’s and forces Antonio out. Koon is the new chipleader but there is a virtual 3-way tie at the top as 3 players are within 2k chips of each other.

A set of raises, and the flop is

Colman goes all in for 201k with a pair of jacks. Both other men stand down. Colman picks up some chips to revive himself.

Junglement all in for 337k and Koon calls.

Jungleman connects trip jacks and becomes the new chipleader with 704,000 chips. Koon takes a beating and gets pushed down 77,000.

Hand 99: Koon doubles up on Jungleman

Koon goes all in and the Jungleman calls.

Koon makes a full house to double up. He is still the short stack.

Hand 110: Mizzi chips away at Jungleman

Both men play the flop. Sorel checks on the flop with pair of eights. An 8 on the turn and Cates bets, Mizzi raises. Cates folds and Mizzi takes the pot holding three of a kind.

Hand 116: Jungleman swings back up

A series of checks and bets. The flop gives the Jungleman a full house, aces and 8’s.

Players are on a short break after hand 127.

Sorry we had some internet issues here between 127 and 157 losing Jason Koon, Antonio Esfandiari and Sorel Mizzi.

Gross goes all in from the SB and Colman calls.

and Jeff Gross doubles up to be the new chip leader.

Cates all in and Gross calls. Jungleman goes all in with J-4 and Colman calls with pocket jacks.

Jungleman is eliminated for the evening. It’s now a heads up between Daniel Colman and Jeff Gross.

And that’s it folks we have our winner for heat 1 of the partypoker Premier League 7!  After 236 hands we eventually saw Jeff Gross go all in with

and get called by Daniel Colman holding

the board ran out

and we have a winner!

This has probably been one of the longest heats we’ve ever seen at the Premier League. Stay tuned as later on today Heat 2 will take their seats with the following players: