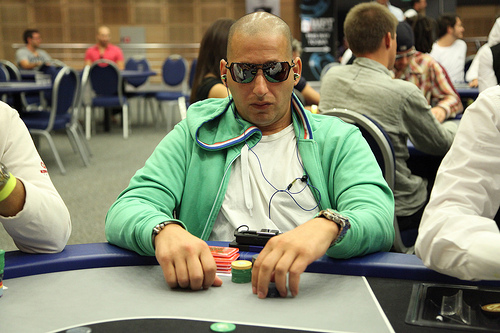 On Day 1b of World Poker Tour (WPT) Malta the sun was shining and the play simply dazzling. Malta really does bring the best out of people and 139 of them were absolutely buzzing as they took their seats inside the Portomaso Casino. We do not know the exact number of people who re-entered after being eliminated on Day 1a, but we do know we received 240 entry fees totaling €698,400 in prize money.

When trying to win a WPT event it helps if you are an experienced player and Tommy Vedes is certainly that. In fact Vedes can go one step further because he also has a WPT title to his name after winning the Festa al Lago event in 2009 for a cool $1,218,225. In fact Tommy Vedes has earned over $2.6 million in live tournament earnings and so it is no surprise that he finished Day 1b as the chip leader with 115,550 chips.

Vedes must have arrived at the table fresh from the table games because his card protectors were six €1k casino plaques. He amassed his stack after banging heads with the likes of Ivan Freitez and Sam El Sayed. Vedes was not alone in the one hundred club and he was joined by Tony Sanguedolce (106,175) and James Sudworth (102,750).

There was no chance for re-entry today and that meant a lot of big names will not be making a return for Day Two and they included Fabrice Soullier, James Akenhead, Kara Scott and Vladimir Geshkenbein.

Once again the biggest buzz was saved for level seven when in walked one Phil Hellmuth. The man just runs so good in life and was immediately seated on a table full of beautiful poker players such as Kara Scott, Claire Renault and Sofia Lovgren. Yesterday he lasted 14-minutes but today he managed to get through the whole level and will return to Day two with 34,075 chips.

Day Two will start at the slightly earlier time of 14.00 (CET) where 154 players will fling chips and cards around this fantastic venue hoping to make it through to Day Three.

For the full live updates od Day 1b click here.