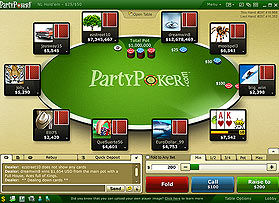 Since the last software update we’ve been listening to the great amount of feedback we’ve received since the last upgrade, gone back to the drawing board on a few issues and today we’re happy to announce some brilliant new features to improve your time at partypoker108.com.

The highlight of the latest software upgrade sees the introduction of fantastic new bounty tournaments from tomorrow onwards. Along with many other minor tweaks, many of which you won’t be able to notice, we will also introduce of a ‘remember table layout’ feature and enhanced players notes.

Bounty tournaments allow players to get paid for knocking other players out. partypoker108.com will take part of the buy-in and put it towards a bounty for each player. For example, partypoker108.com could take $5 of a player’s $20 + $2 buy-in to create their bounty, with the other $15 going towards the prize pool. The bounty winnings are credited to a player’s account immediately.

This isn’t a default feature, players have to tick the ‘remember table layout’ check box under Preferences/General/General Options to activate the feature. This feature will remember the layouts on the specific computer a player is playing on, layouts will also be remembered on a secondary monitor.

The new enhanced player notes feature makes it even easier to make notes on opponents. All a player has to do is double-click on the player’s image at the table to open the ‘Notes’ section with their name already entered in the ‘Select Player’ field.

For more information on the latest upgrade visit partypoker108.com, where you will also find an archive of our previous improvements.

If you have any suggestions or feedback on anything to do with partypoker then it would be great to hear from you.

You can leave you comments on this page by clicking on the ‘leave a comment’ link in the top right hand corner of this post.