You are at:Home»Older posts»Benjamin Pollak Amasses a Million and Leads Day Three at WPT Paris 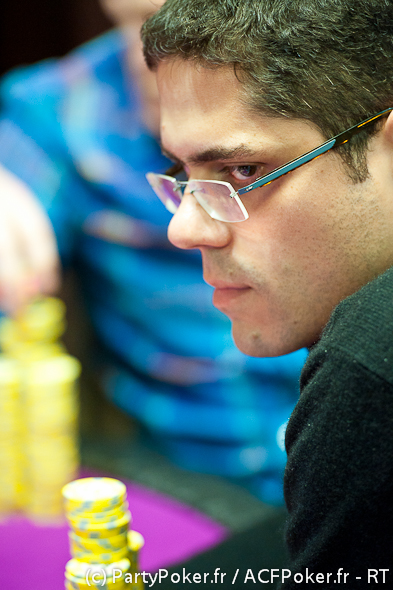 On the 16th Oct 2009, Benjamin Pollak finished in 11th place at WPT Marrakech. After day three of the WPT National Series in Paris he has a new personal best performance at a WPT event. 31 people started and only 10 remain and Pollak is in first place with 1,156,000.

Pollak added 700,000 chips to his stack today and one of the most significant hands came against this mornings chip leader. Nichlas Mattson started the day with 315,900 chips and remained one of the front-runners all day until running into Pollak. The result was a pre flop all-in with 630,000 in the pot. Pollak had

and Mattson had [ax]

gave Pollak the chip lead and he never looked back.

Sam Trickett didn’t take log to overtake Mattson and become the early chip leader. He then stayed there until the death when first Jean-Francois Tyczynxqi and then Benjamin Pollak over-took him. The loudest scream of the day came out of the mouth of Trickett. Reporters ran over to see if he had doubled up when in fact Trickett had leapt into the air after Wayne Rooney had scored against Man City! Trickett was watching the game on the big screen in front of him and is a devout united fan.

Natalia Nikitina has had a fantastic day battling it out with the likes of Sam Trickett. Nikitina played the short stack most of the day and was all-in countless times. Then with her last 120,000 she moved all in with

and Ilan Boujenah called with

Please join us tomorrow at the slightly earlier time of 14:30 (CET) when we play down to the final table.

Live Updates of Day Three Can Be Found Here

The live updates of day three can be found here